What would you do if you were homeless?

It’s a heavy question, and one that kicked off the Design-A-Thon workshop at Seattle’s Makerhaus earlier this week. The four-hour event, which drew an eclectic mix of industrial designers, woodworkers, tech developers, and other creative types, was focused on developing collaborative solutions to the vast issue of homelessness in Seattle.

“I am interested in the humanistic problem solving potential of design,” says Regis Lemberthe, the organizer of the event. “The most important point to me is to not consider ‘humanitarian’ in the sense of ‘charitable,’ as in first world helping the third world, but in the sense of people working together towards bettering critical situations. And that can be anywhere.”

Lemberthe is part of Berlin-based industrial design firm A&Re Design Beta, who received a master’s degree in Humanitarian Design And Sustainable Living at Design Academy Eindhoven in the Netherlands. A couple months ago, Lemberthe packed a bag and set off from Berlin on his first trip to the United States.  He had set up a month-long residencies at Makerhaus and co-working spaces similar to Makerhaus in cities including Portland; Oakland, California; and New York. In most of those places, he  planned design-based workshops addressing social issues unique to each city. The Seattle event had more than 15 people sign up, making it Lemberthe’s first official workshop in the U.S.

“Régis reached out to us and said, ‘Hey, I’m doing this experiment, traveling to a handful of cities across the United States, conducting these workshop,” says Ellie Kermery, co-founder and strategist of Makerhaus. “He’s prototyping in real time and he’s completely fearless. He’s not even formally funded, but he believes in empowering a movement by training others.”

The workshops are time-based, forcing participants to work under the gun. Each participant comes into Makerhaus and draws a slip of paper out of a jar. In Seattle, each slip of paper had a question related to homelessness. To illustrate the bevy of creative answers, there were markers, tubs of Legos, containers of Playdough, cardboard boxes.

From there, the 17 attendees brainstormed five crazy ideas to address homelessness: no rules, no restrictions, no budgets. The ideas were written on Post-It notes, then stuck to a wall, where the entire group clustered the ideas into groups with themes such as wellness, community, and food. Two people from each group presented the ideas, and the rest of the participants gave feedback. At the very end, the groups rotated, working to improve on a project other than their own. Ideas ranged from computer kiosks set up outside of libraries that allowed the homeless to seek medial advice and browse job listings, to traveling “Clean Machine” trucks that contained laundry and showering facilities.

People’s life experiences, jobs, backgrounds, and even travels made for lively and creative discussion during the entire process, and Lemberthe counts this as one of the important aspects of the workshops.

“You get many different sensitivities, points of views, areas of expertise. And getting such different people to work together can only yield interesting results,” he says. “We had designers, social workers, former homeless people and members of civil society of all sorts, and that confrontation of background enriches the debate.”

Two days after the Design-A-Thon, Lemberthe  was off once again in a green minivan that he bought upon his arrival in the U.S. He built a bed in the back and plans to road trip across the country while he encourages the design community to think beyond current disciplines.

“I get to introduce people to the process of social design without it being a tedious course,” Lemberthe says. “It's a fun and engaging event that let people interact and empathize with a given situation. Even if just for that it's worth doing.” 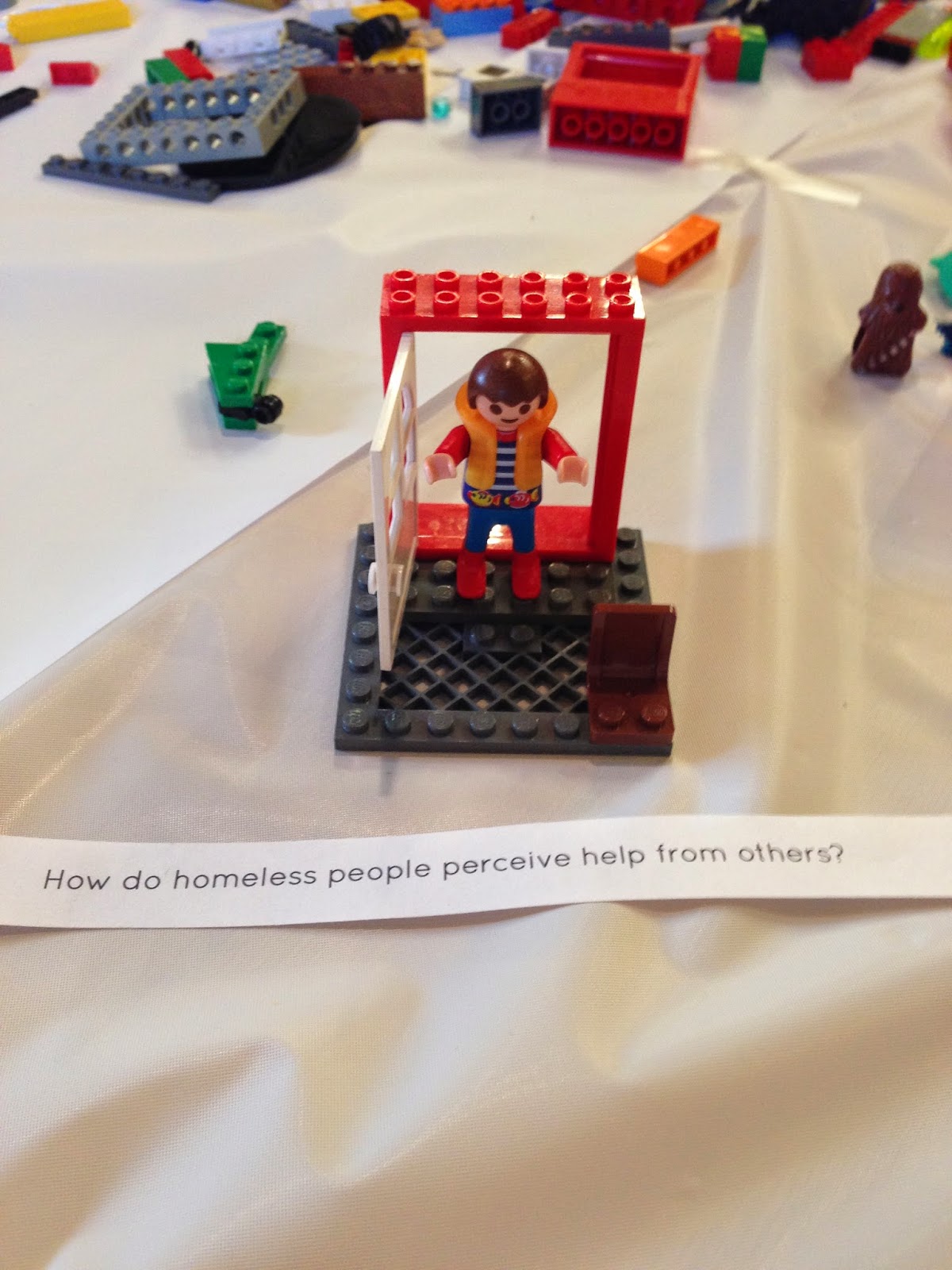 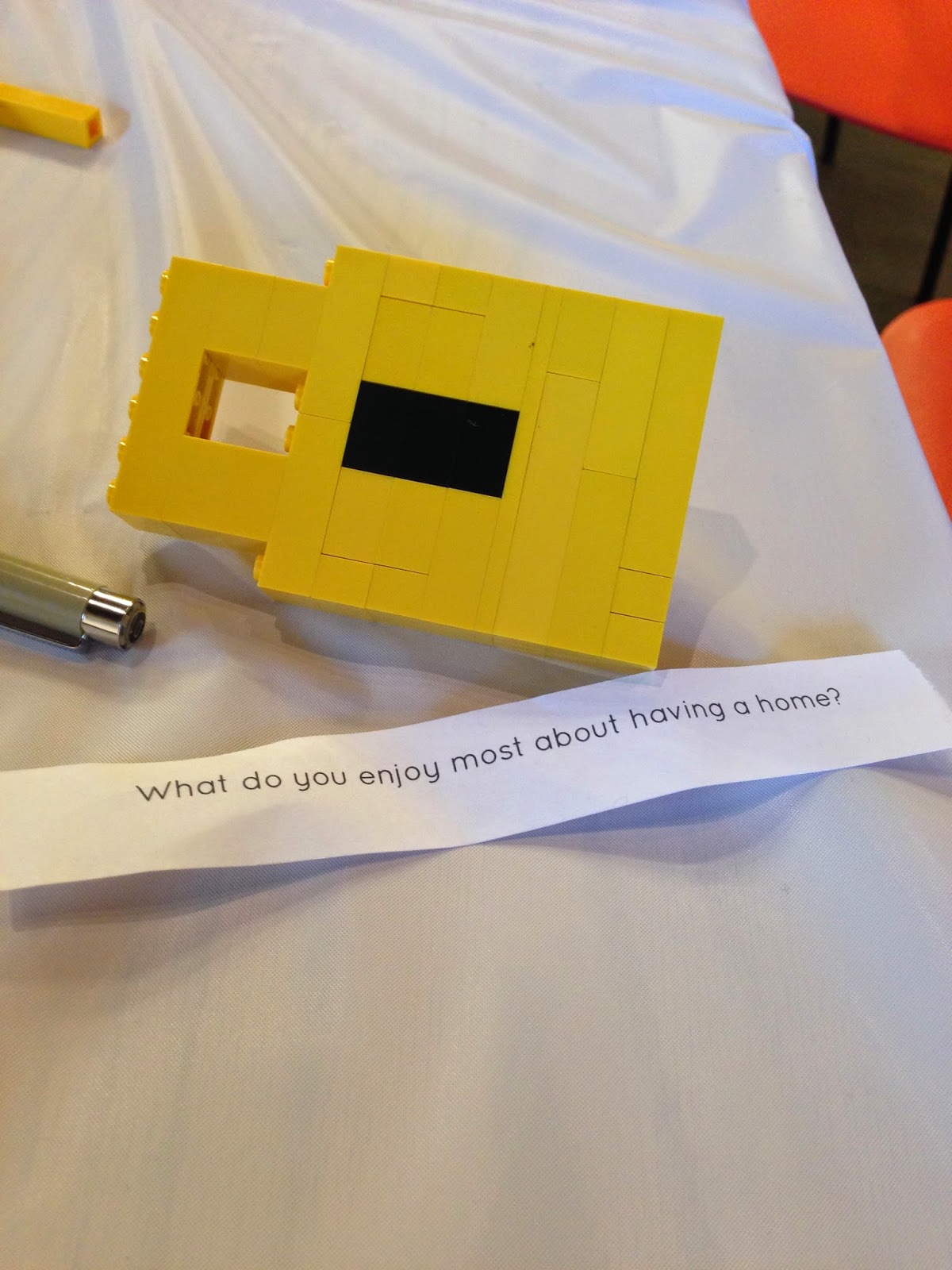 Above: two questions drawn out of the jar, and their answers created from Legos.

Posted by Rachel Gallaher at 10:07 AM